Given the passions of wartime, and general anti-Japanese racism, it is unsurprising that Earlham’s decision faced criticism, even acts of hatred. Displayed here are samples of letters and articles written both in support and against the students. 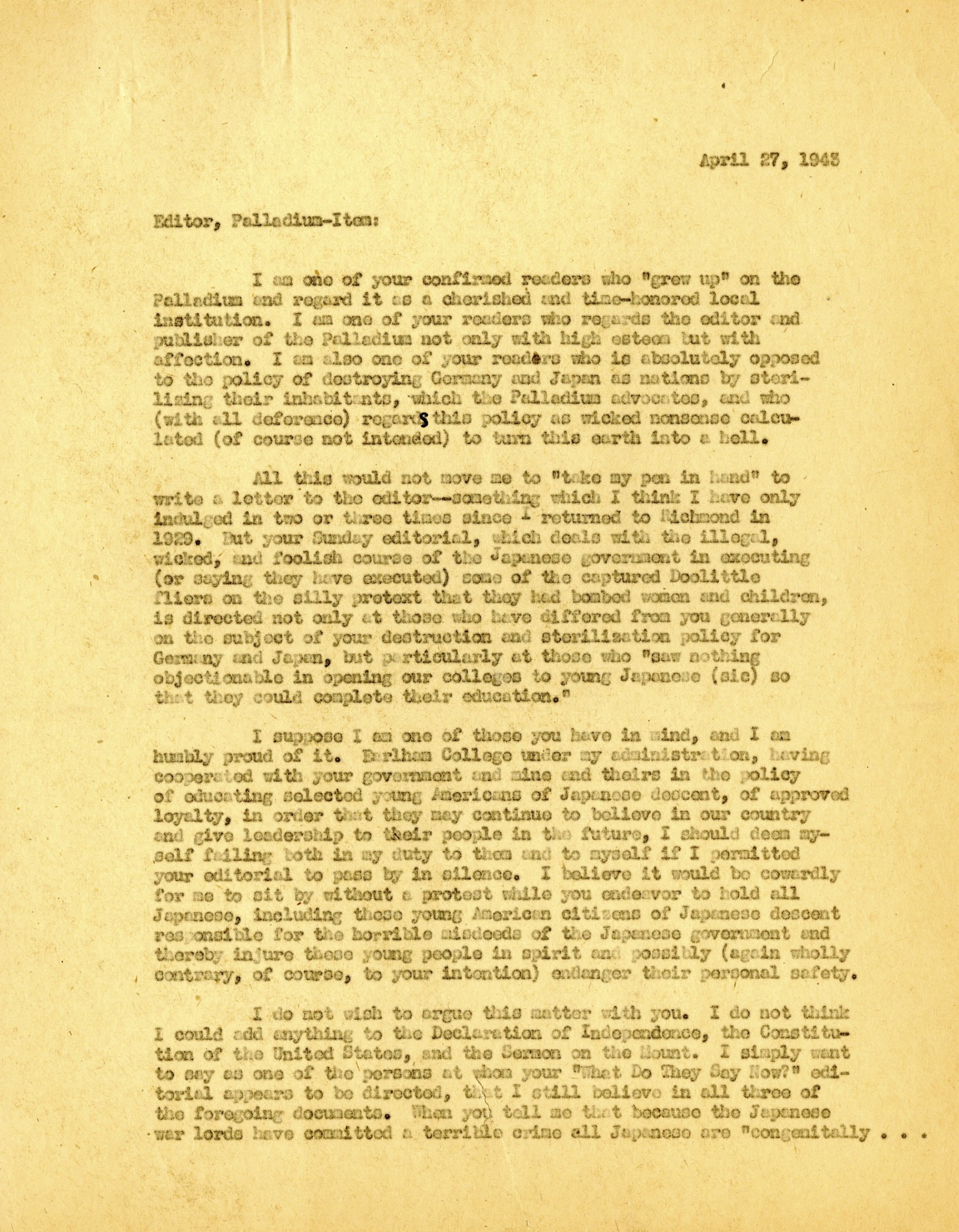 Earlham President Dennis wrote this eloquent letter in response to a spring 1943 article by Rudolph G. Leeds, the publisher of the local newspaper, the Palladium-Item,
Students also responded. Newton Wesley actually went to see and argue with Leeds. The Earlham Post blasted the critics. 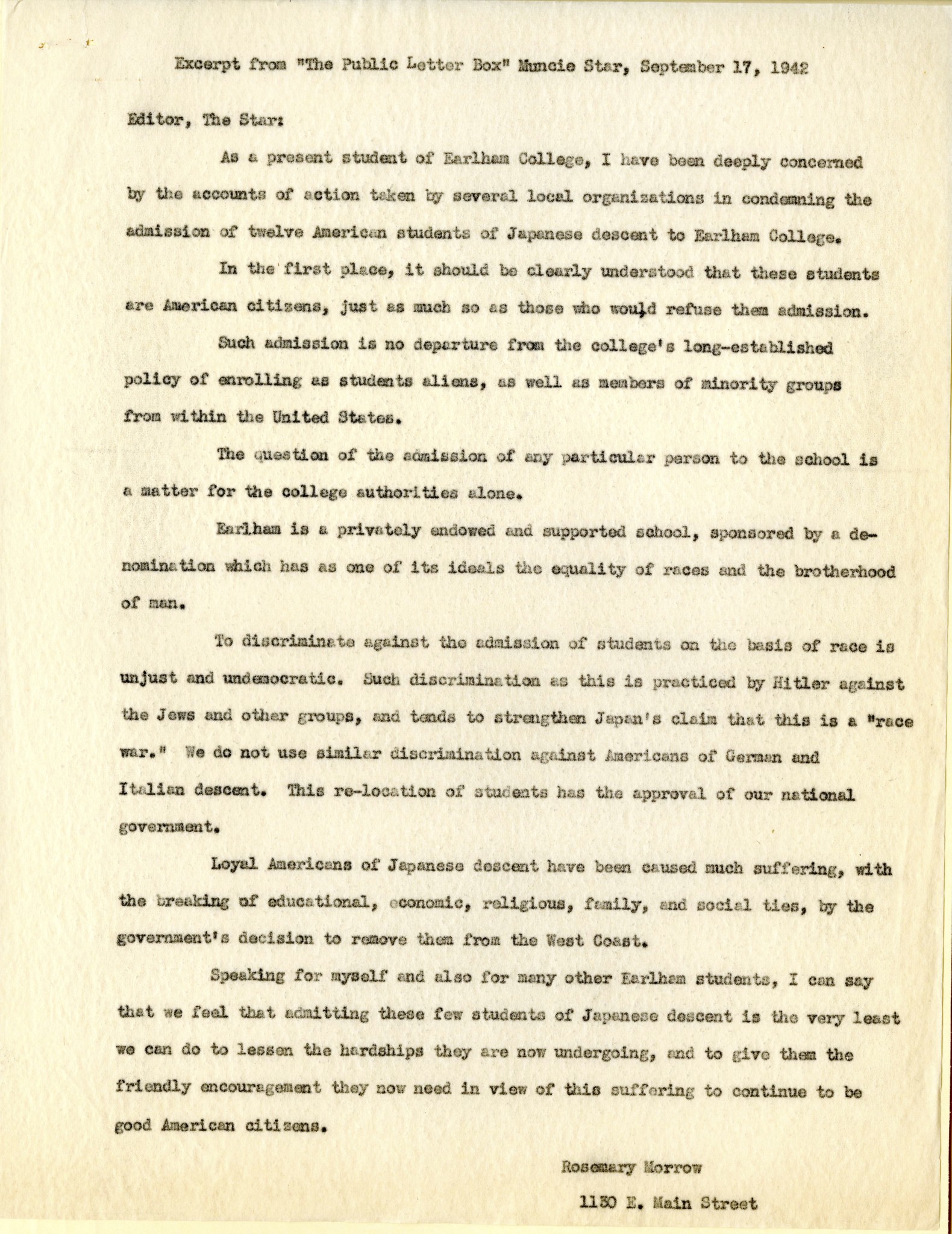 Students also wrote letters to other area newspapers, including this letter to the Muncie Star in 1942. 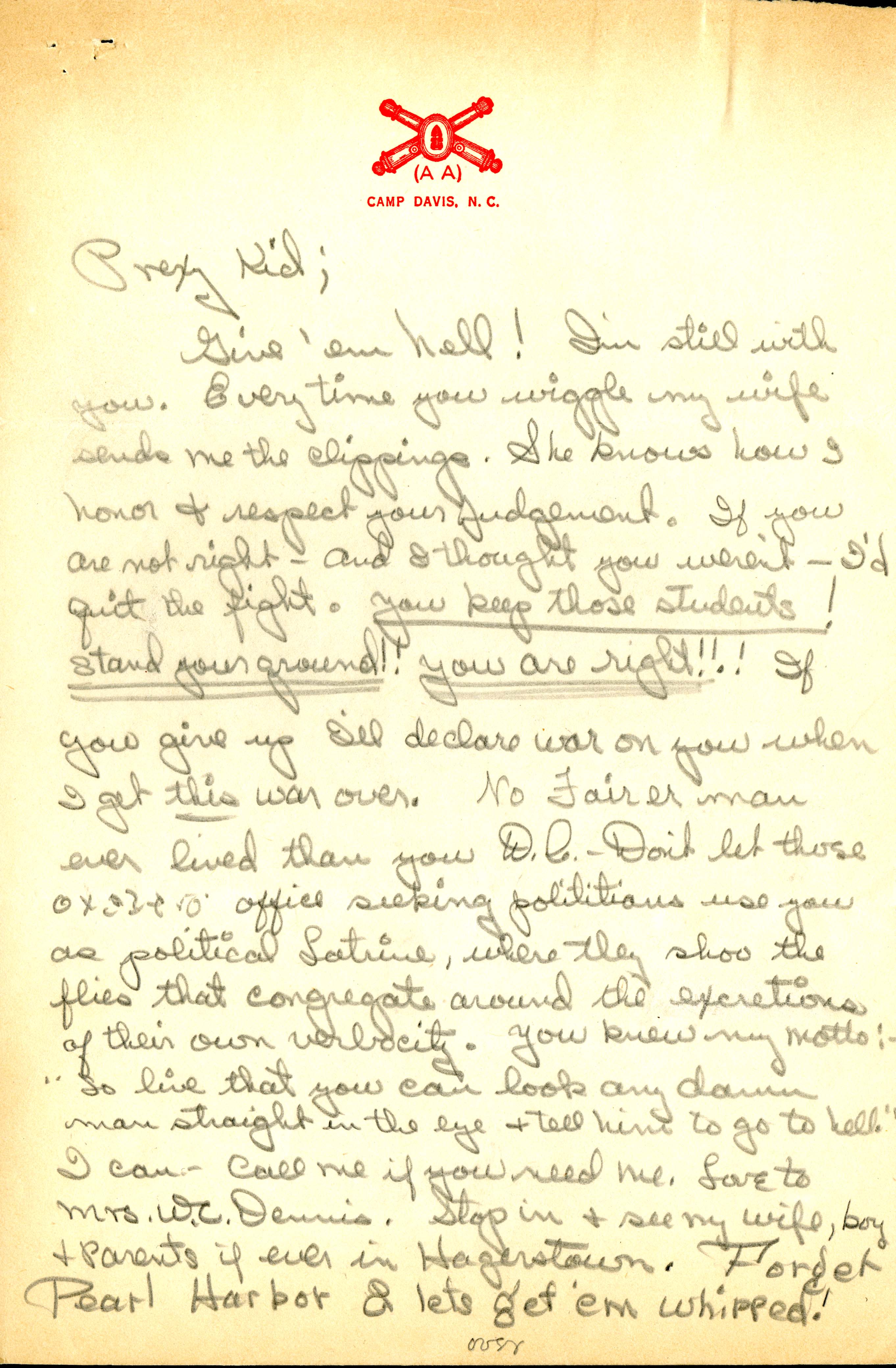 Don McCullough, a 1938 graduate who was now an army officer, sent support. 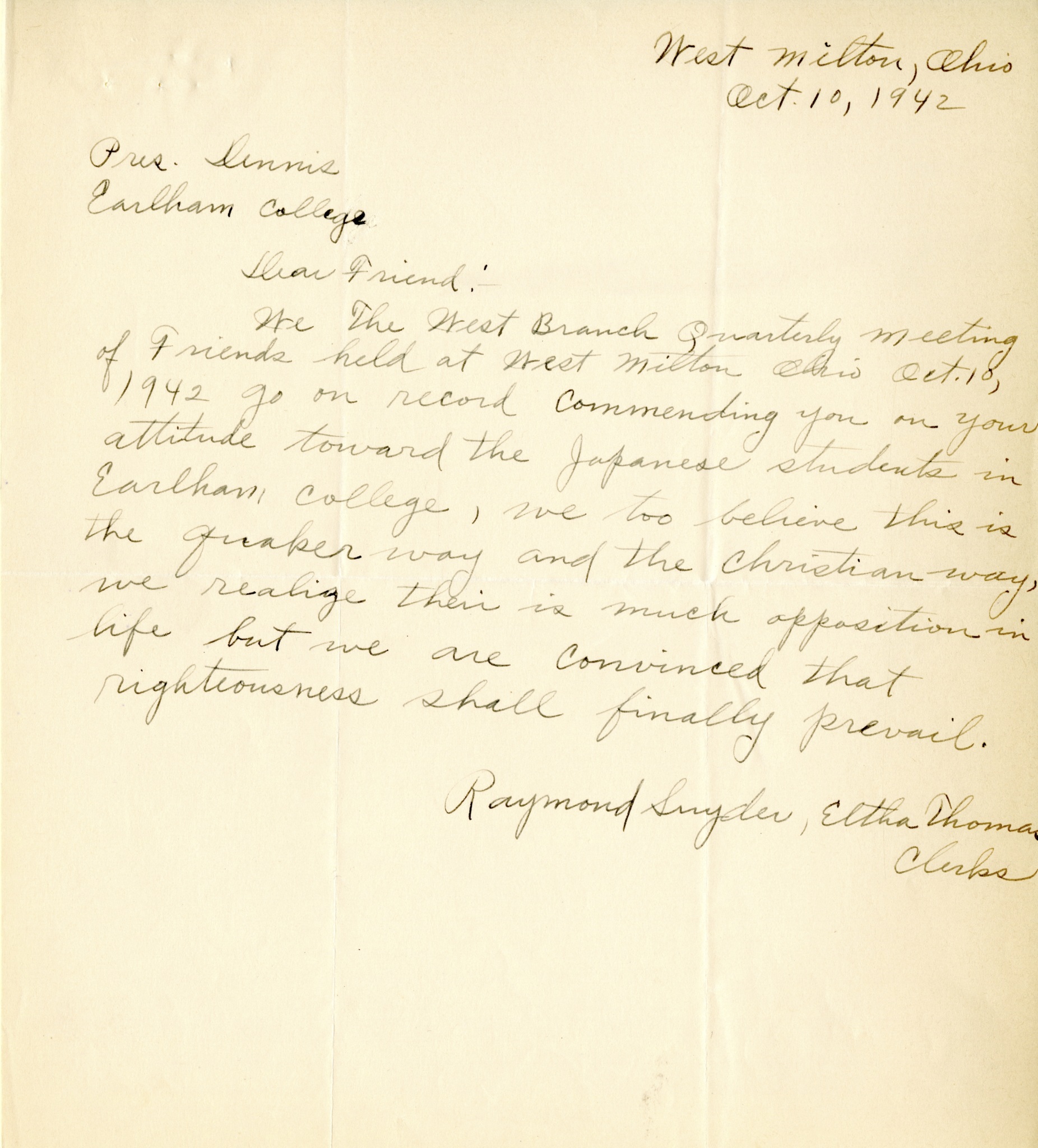 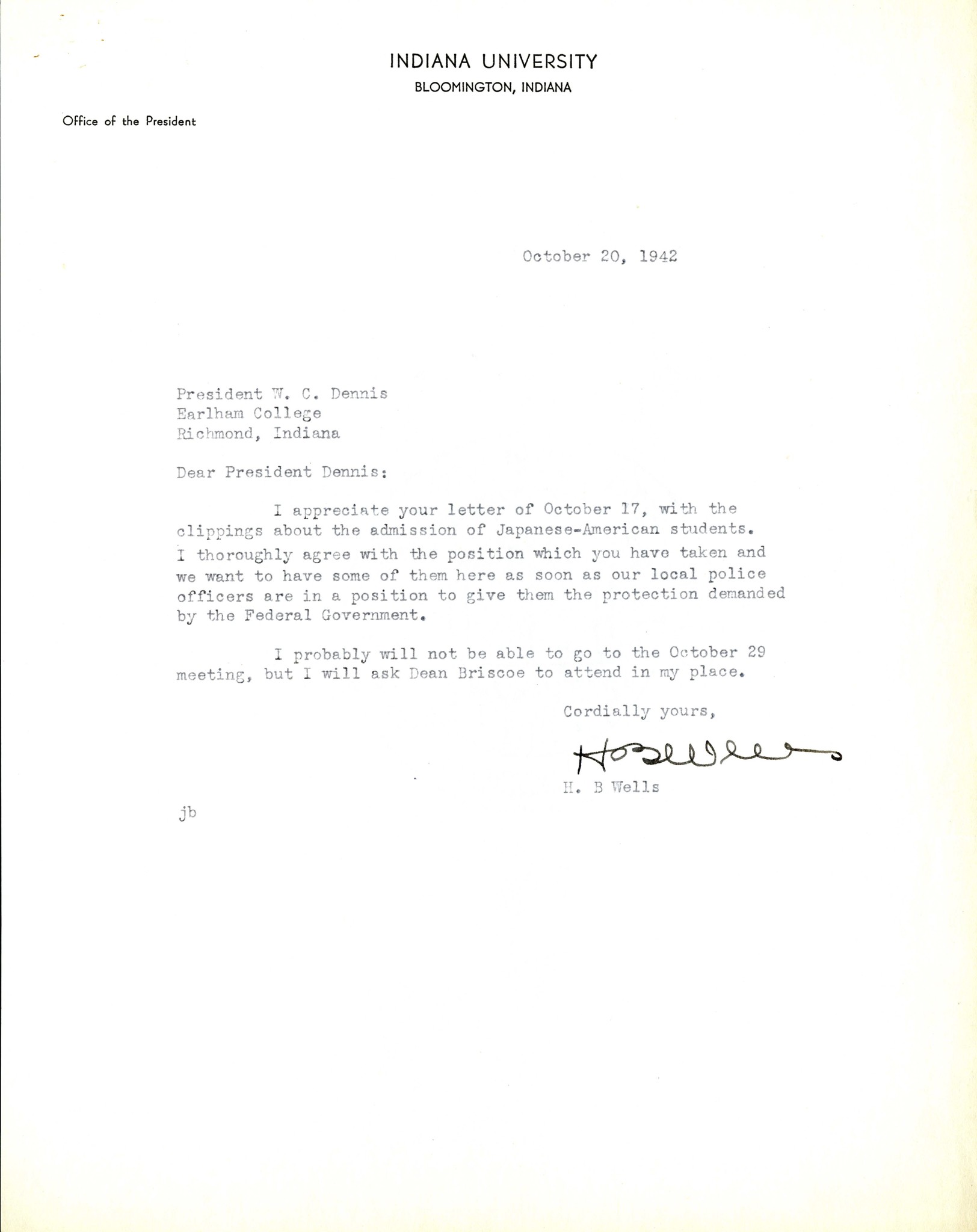 Letter of support to President Dennis from Indiana University President H. B. Wells. 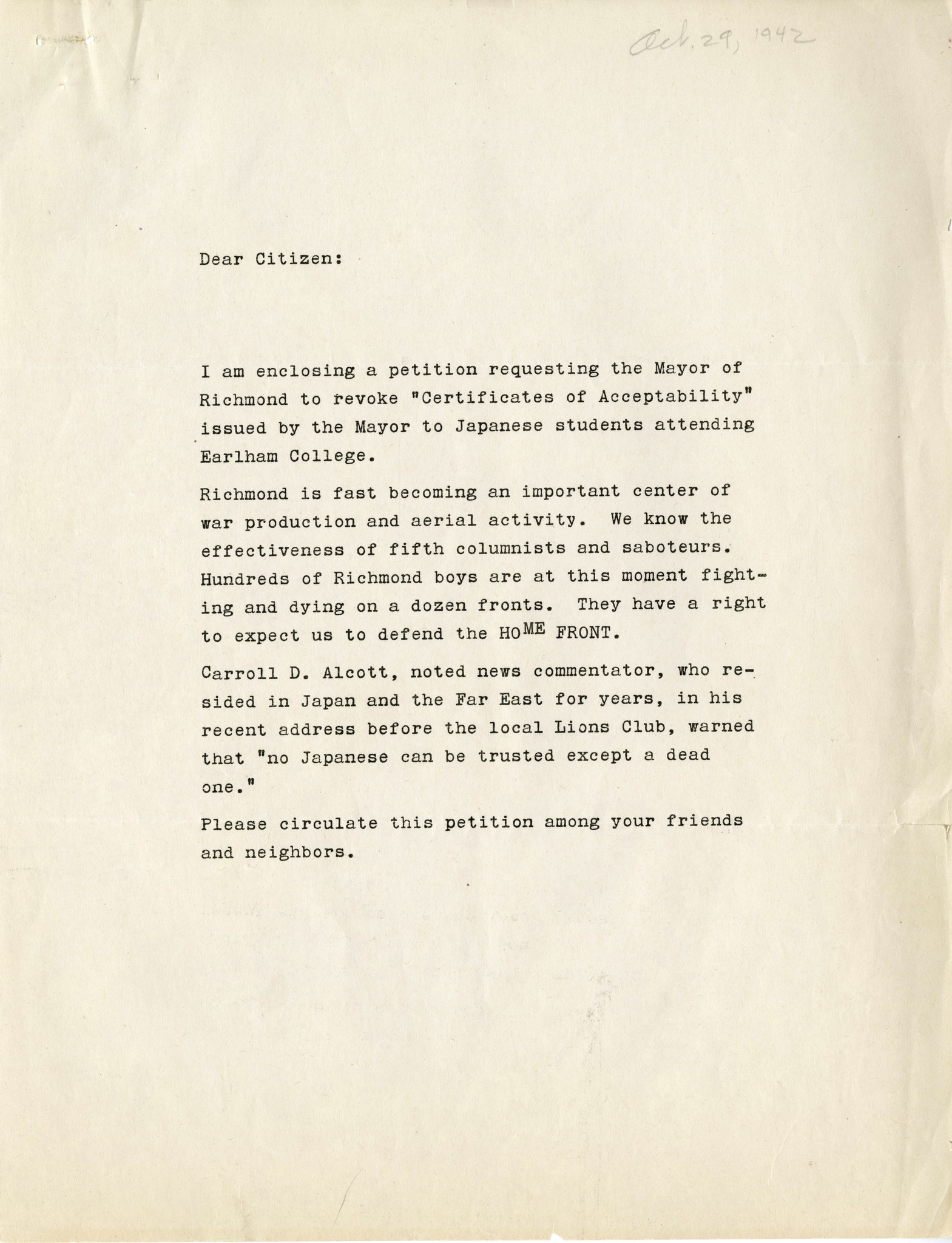 Given the passions of wartime, and general anti-Japanese racism, it is unsurprising that Earlham’s decision faced criticism, even acts of hatred. A group of Richmond residents sent President Dennis a petition. 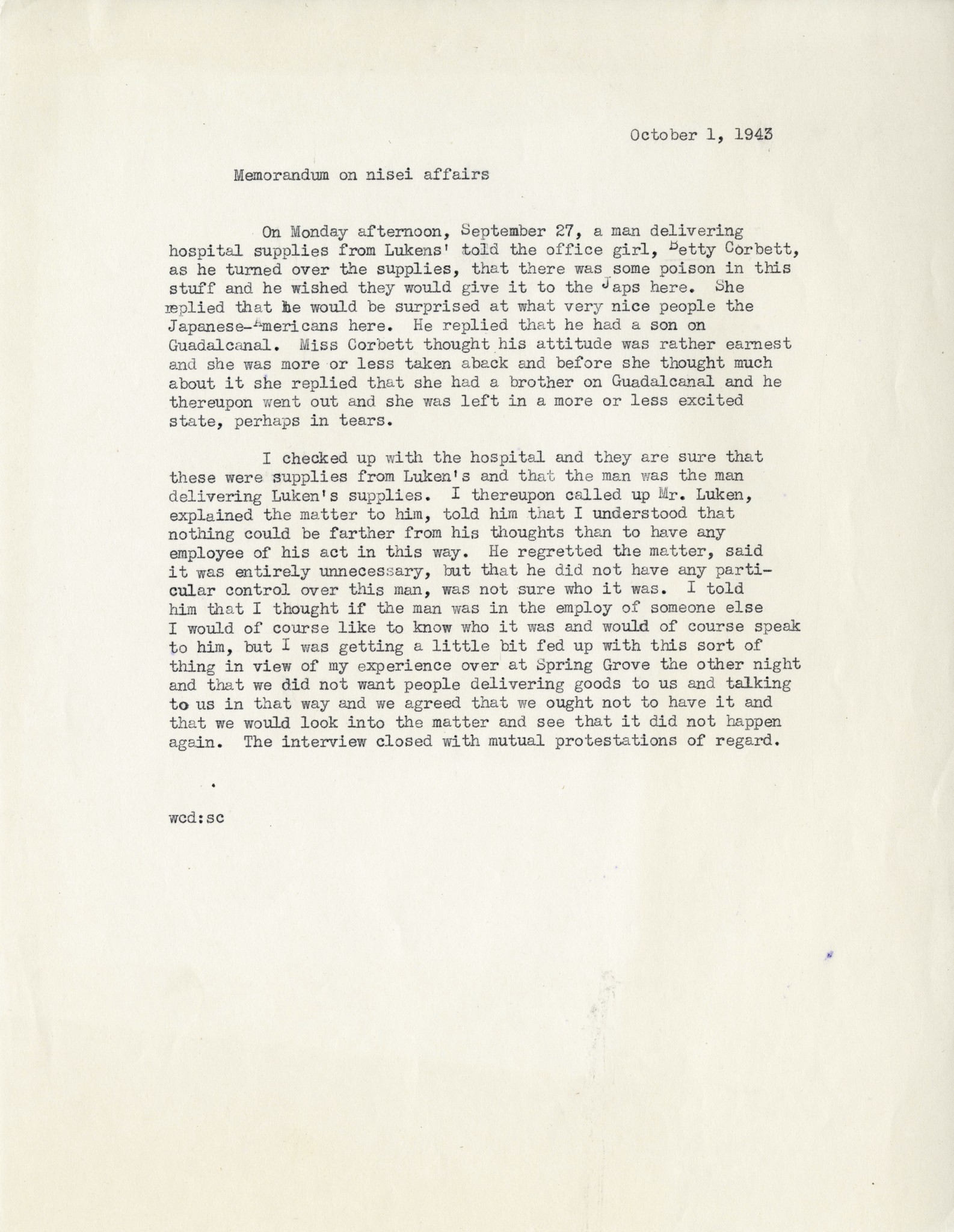 A deliveryman bringing supplies to campus told a secretary that the packages contained poison for the “Japs.” 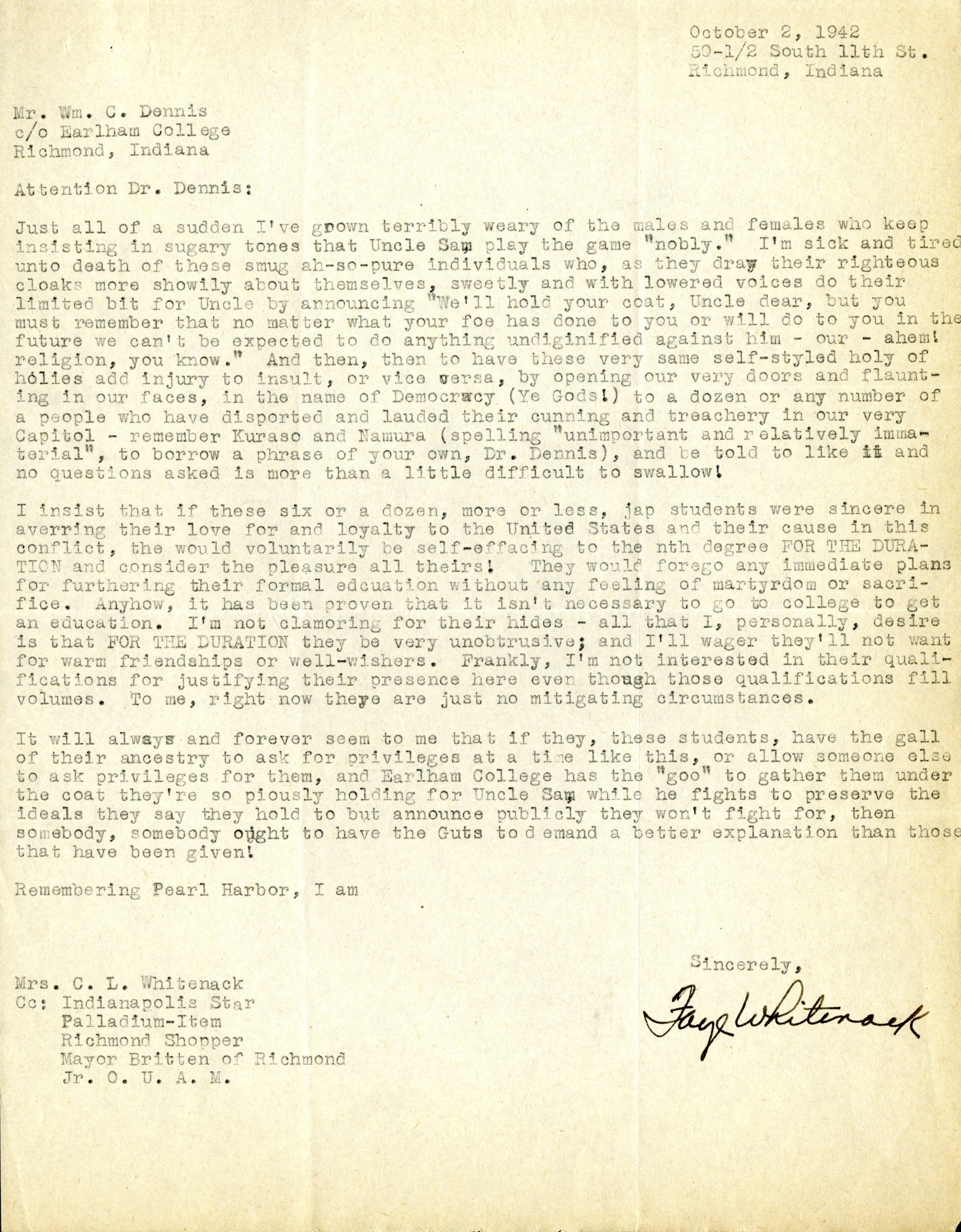 When the mayor of Richmond faced a tough reelection campaign in the fall of 1942, he claimed that he had opposed the coming of the Japanese Americans to Earlham, and other groups joined in denunciation. 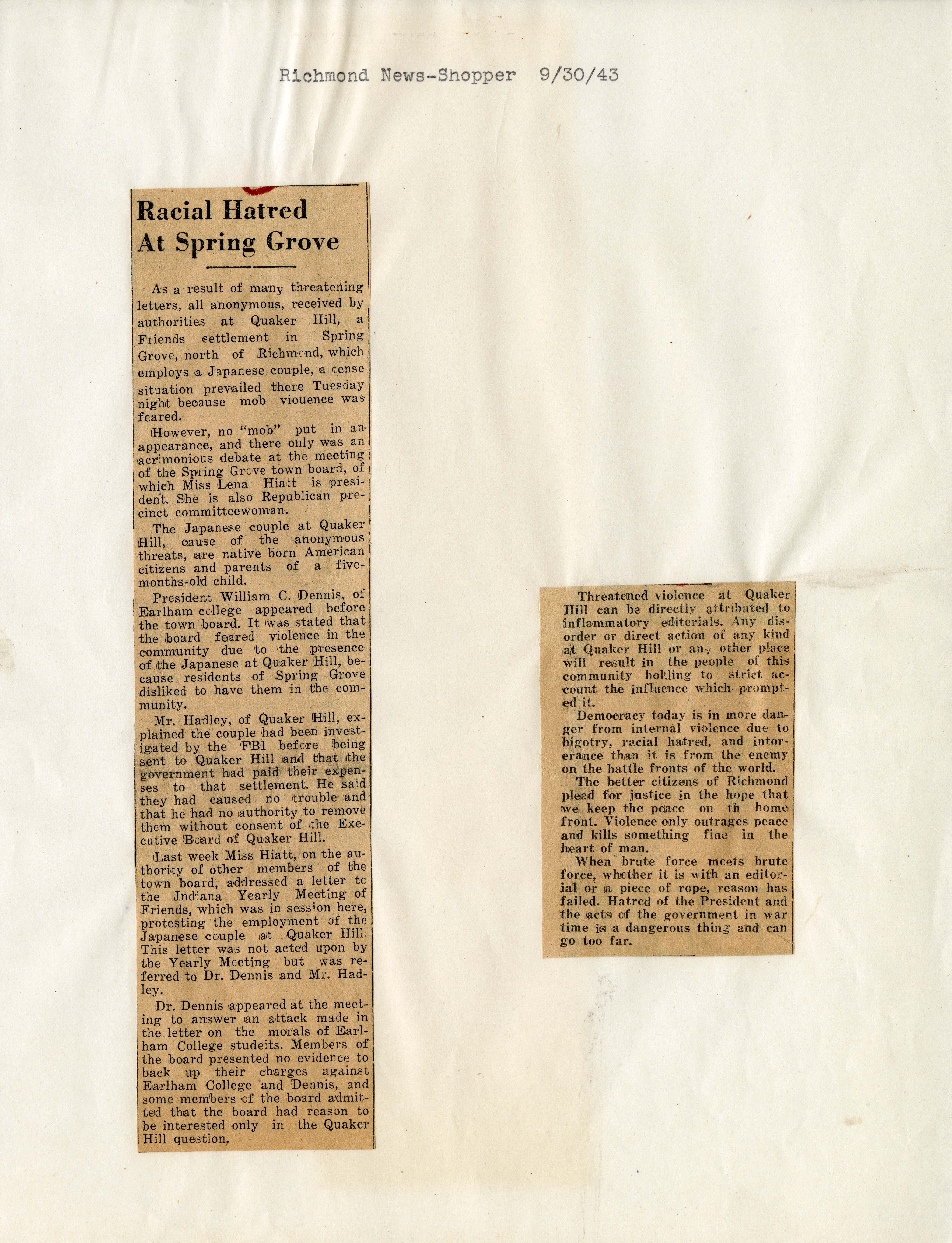 Connected was a controversy over the presence of a Japanese American couple with a young child at Quaker Hill, a study center on the north side of Richmond. It was located in a separate municipality, Spring Grove. The town council president, Miss Lena Hiatt, was irate over the presence of Japanese in the area. 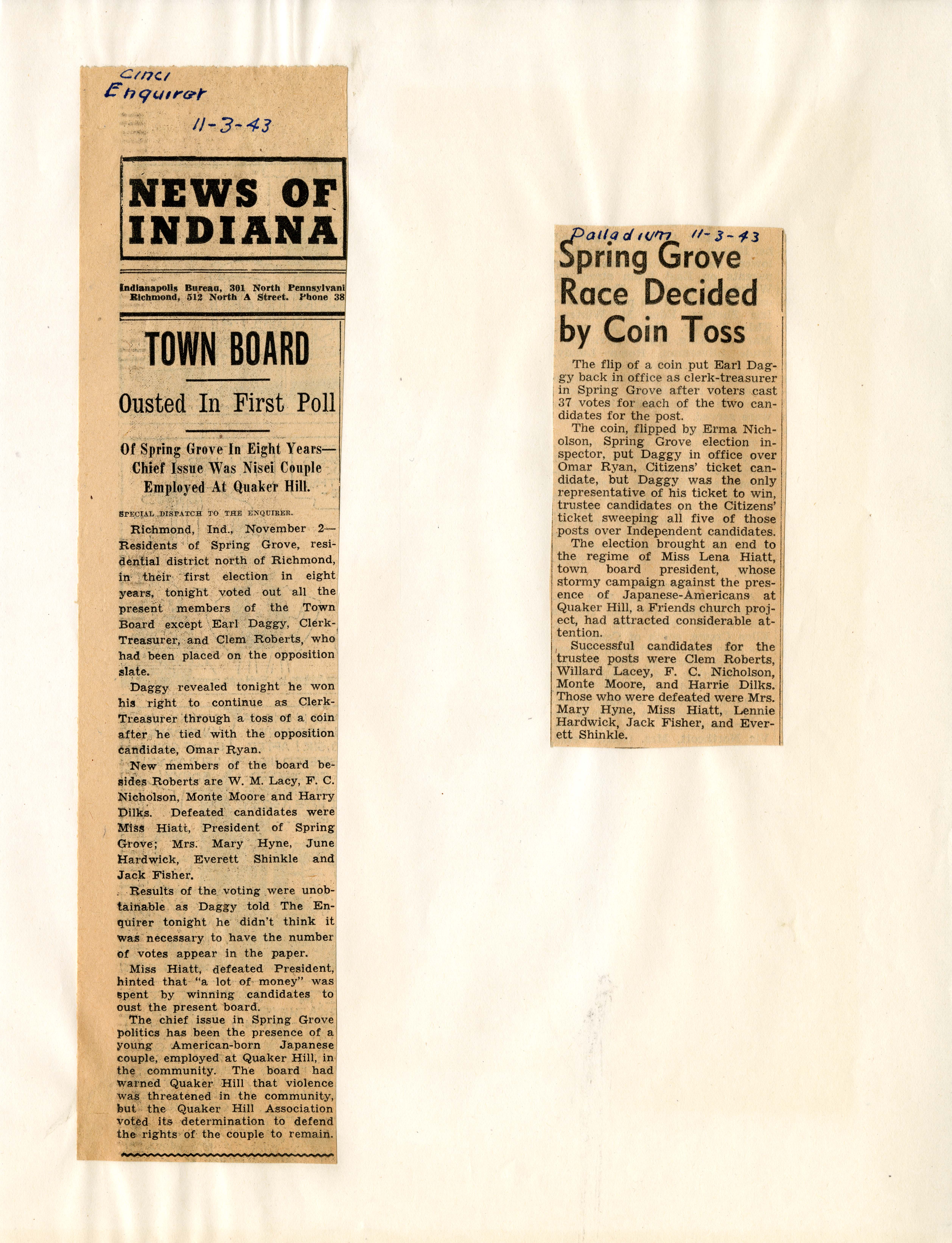 President Dennis considered filing a libel suit or having Hiatt prosecuted for sending a threatening letter, but instead decided to use his political influence against Hiatt and her supporters. In the November 1943 municipal elections she and all but one of her supporters were defeated. 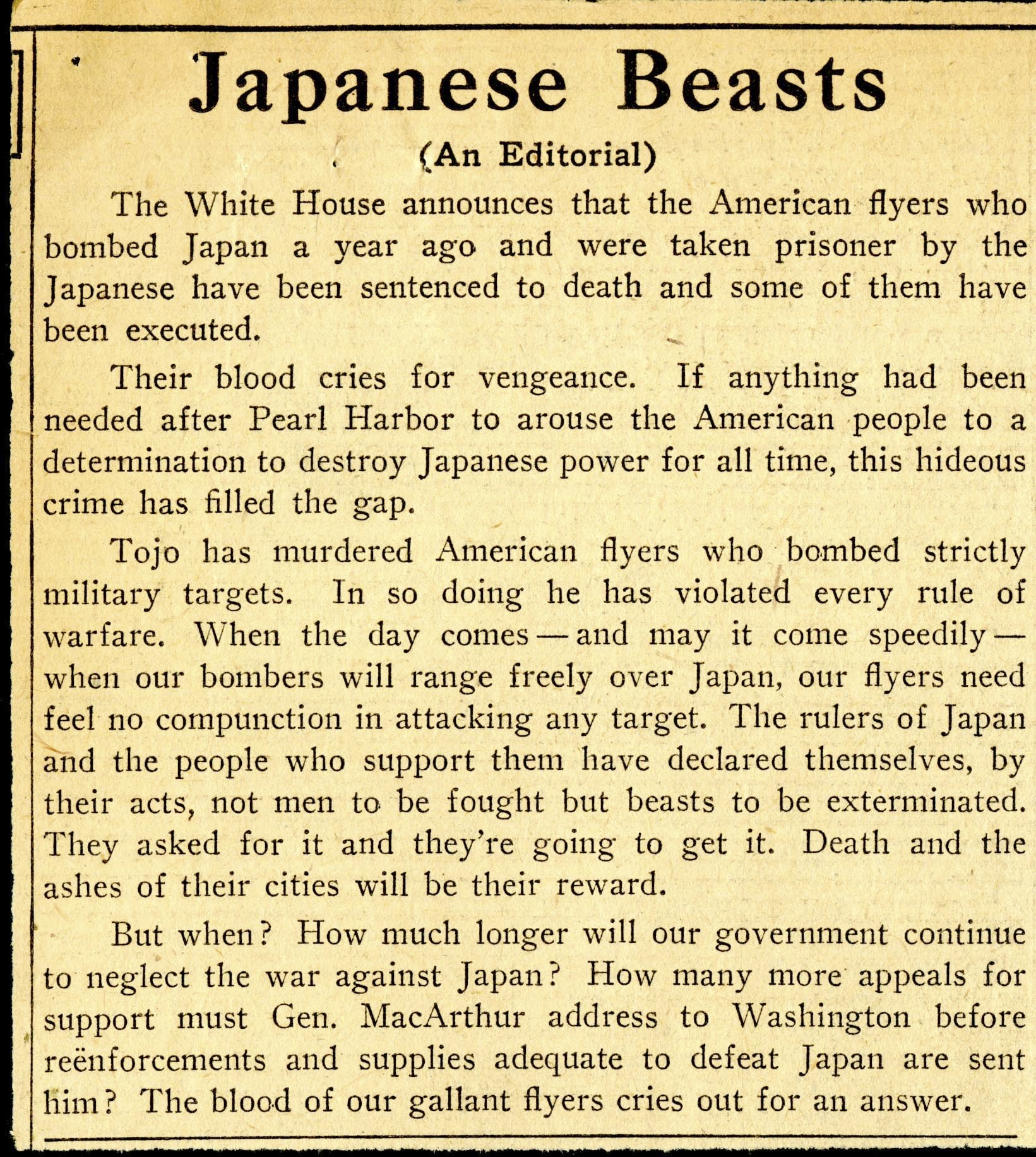 In the spring of 1943, Rudolph G. Leeds, the publisher of the local newspaper, the Palladium-Item, unexpectedly launched an attack on the Japanese Americans at Earlham.

President Dennis consulted with the mayor of Richmond and other community leaders. He even met with local American Legion post officials and offered to allow its officers to inspect the students’ files, so they would be satisfied that the students posed no threat to the community. He pointed out that they met the highest standards. Two students coming from Oregon, for example, had letters of recommendation from the governor and the publisher of the state’s largest newspaper.