The Japanese American students found acceptance at Earlham. An editorial in the campus newspaper, the Earlham Post, hailed the decision to admit them. 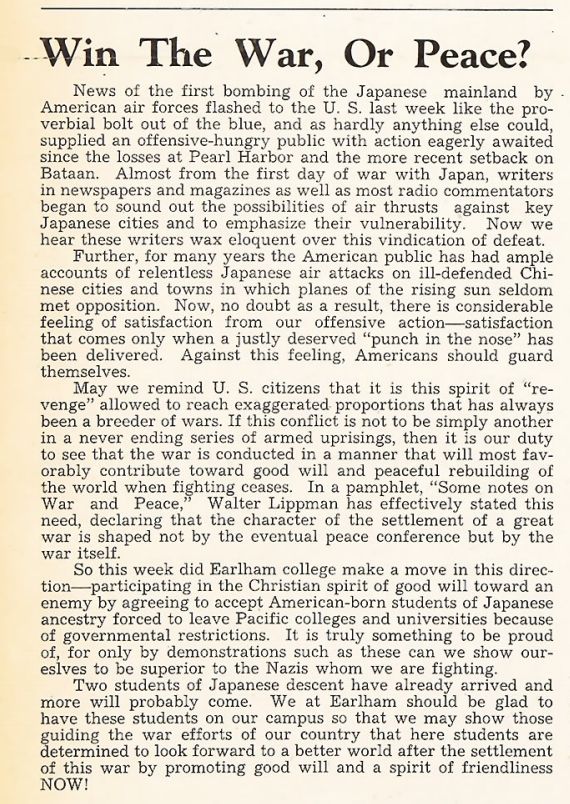 Letter from Hide Tomita Published in the Earlham Post, November 9, 1943

One student described his experience thus:

“The kind acceptance by the students and faculty, their help in all things, and their tolerance of my individual peculiarities have restored my faith in goodness of people in general. . . . In all the years to come it is hardly likely that I shall forget this year in which her [Earlham’s] influence guided me back to normalcy."

The Japanese American students were active in a variety of campus activities. Henry Tanaka, for example, was elected to the council of Bundy Hall, the men’s dormitory; the Precedents Committee, which had charge of freshman orientation; and the Ionian Society, the campus men’s literary society. He also sang in the college choir and was active in the campus YMCA and the Earlham Peace Fellowship.

Henry Tanaka, seated center, with the council of Bundy Hall. 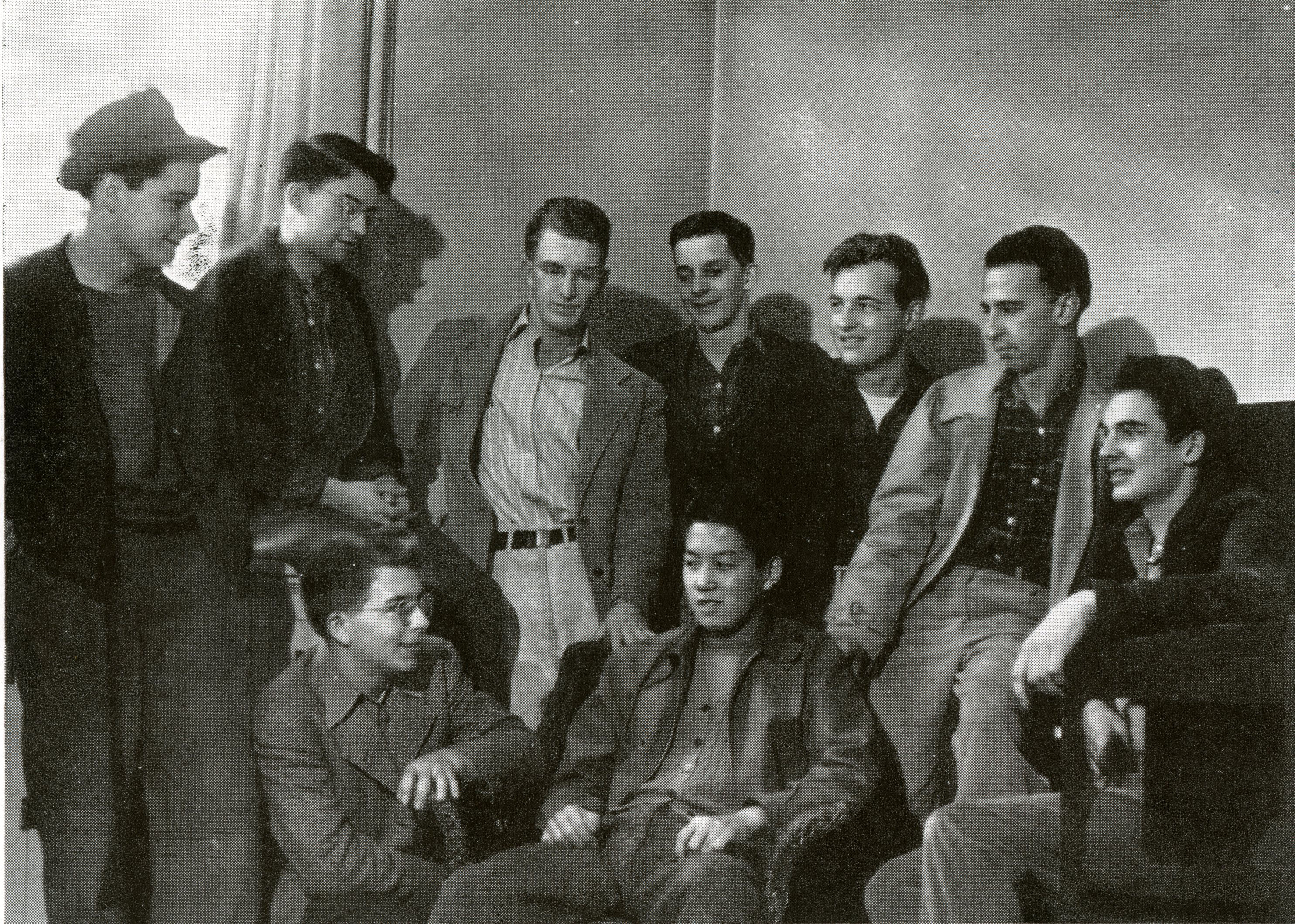 In 1943 Newton Wesley was a chapel speaker. He described his personal experiences of forced relocation to an internment camp.

Selected quotes from his speech:

"I don't think any of us thought American citizens would be evacuated---time proved us wrong."

"May 5, 1942 was an eventful day which will live in my memory for that was the day I entered camp. . . I remember what a lovely day I thought it was; it felt good to draw the free air into my lungs for I was soon to be behind a barbed wire fence."

"Some believe it a dangerous precedent since the next time it could be that people of any particular racial background might be moved." 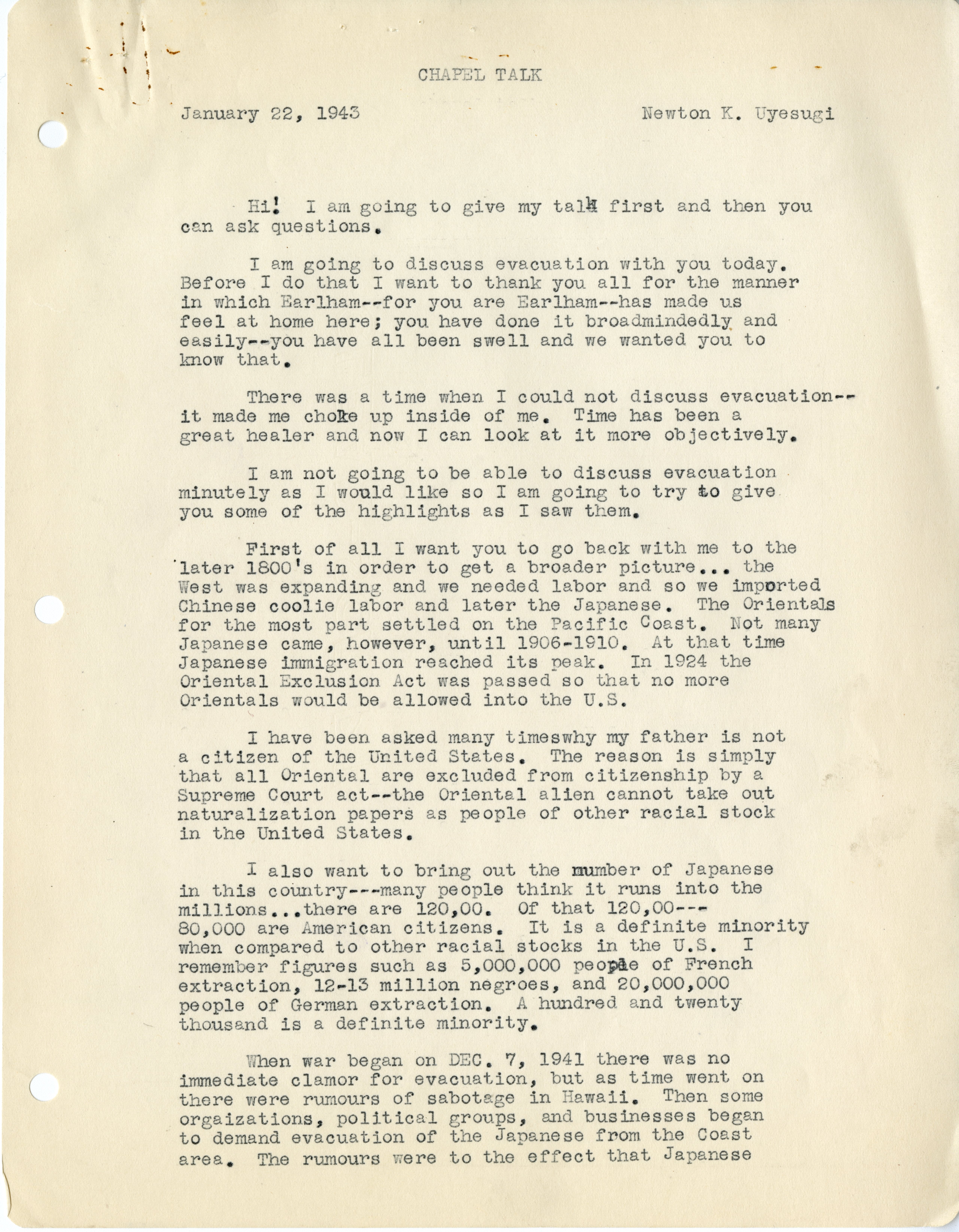 The one line that Dennis drew was to discourage Japanese American students dating outside their group. Today it is impossible to determine how much of this was simple racism and how much was what President Denis called “hard common sense.” Privately Dennis worried that reports of Japanese men and “white” women being seen together would inflame an already volatile situation. Thus when Edward Uyesugi and Ruth Farlow, a Quaker student from Paoli, Indiana, fell in love, they were “counseled” by campus authorities. The counseling had little effect; they married after graduation and settled in Ruth’s hometown.

Ruth Farlow, seated center, and Edward Uyesugi, right, both served on the editorial staff of the Earlham Post in 1944.  Uyesugi wrote a sports column. 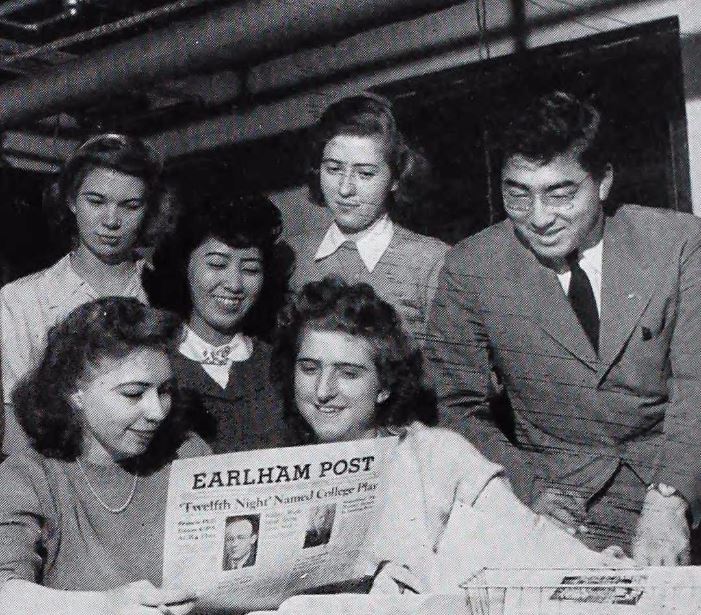 Attempting to minimize the chances of a backlash in the wider Richmond community, and conscious that failure to satisfy federal authorities could mean the forced withdrawal of all Japanese American students, Dennis laid down firm rules. Japanese American students would have to provide “proof of absolute loyalty and financial capacity.” They would receive no scholarships, nor would they have campus jobs, so that there would be no question of them benefiting at the expense of “other American students.” Significantly, even in this statement Dennis emphasized that Japanese Americans were Americans. 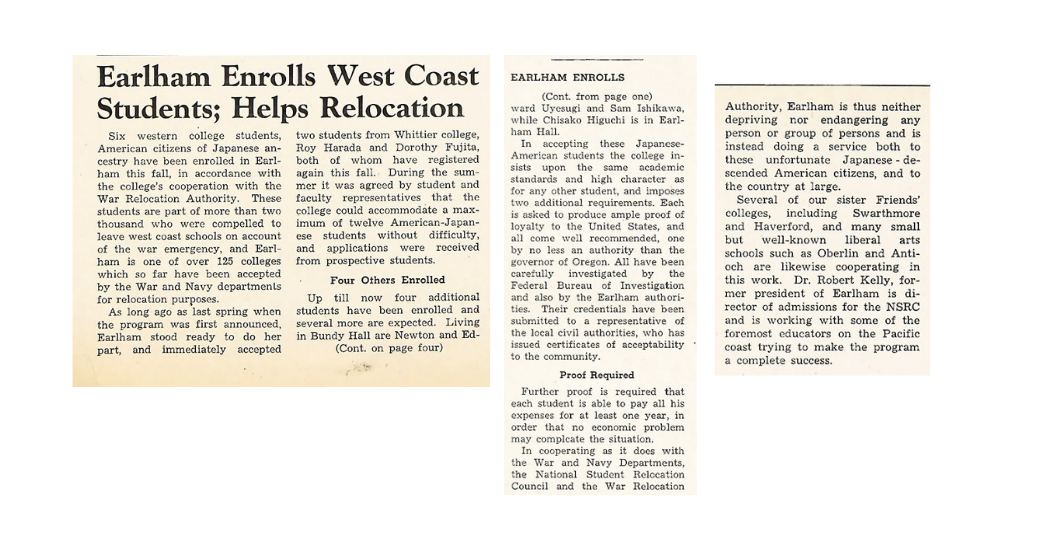 President Dennis consulted with the mayor of Richmond and other community leaders. He even met with local American Legion post officials and offered to allow its officers to inspect the students’ files, so they would be satisfied that the students posed no threat to the community. He pointed out that they met the highest standards. Two students coming from Oregon, for example, had letters of recommendation from the governor and the publisher of the state’s largest newspaper.