Each month, a member of the Earlham community offers the top 40 books that have most influenced him/her, personally and professionally.
Click on the tabs below to view their selections. 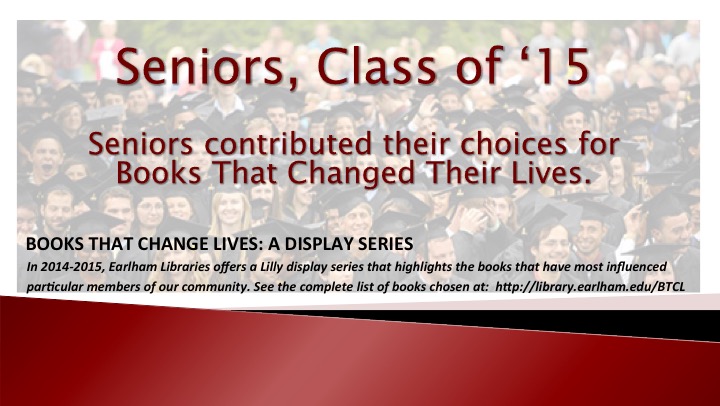 "Never has a book hit my heart with its symbolism behind grief and hilarity."
- Zoë Stringer

"This is the book that made it all click, made me realize I actually knew why I was a WGSS major. I have the biggest mind crush on Judith Butler."
- Becca Leavell

"Each chapter of the book tells us how to treat people and make our life better. It teaches us through the examples of many people in different situations."

"Not going there again."

"It is an extremely well written and engaging book, one of the few novels that truly made me feel emotion and a sense of emptiness upon finishing the text. "

"This book really opened my eyes to the power of education that stems far beyond the mere memorization of static facts. By examining the relationship between the colonizer and the colonized, we begin to understand that it is not only WHAT we are taught, but HOW we are taught it- are students empty vesicles waiting to be filled with bits of fixed knowledge, or are they co-creators of it, existing in an ever-growing universe? Do we live a life of silence and internalized oppression, or do we find it in ourselves to feel like empowered transforming agents? This book caused me to think critically about my education, myself as a student, the intention behind my pursuit of a college degree, and education as an agent of social change or a reinforcer of oppressive power structures. I've read it over 10 times, and it still remains just as salient as ever."

"Opened my eyes to a world of conservation success, struggle, and hopes for the future."

"It has literally influenced every aspect of my life."

"This work was instrumental in teaching readers about the stereotypes and prejudice that the Western World places upon the "East" or "Oriental." All individuals should look into this work to become grounded in the West's domination / colonization fo the world. Must READ!"

"This choreopoem is for all women as it details the beauty, strength, and uniqueness gathered from womanhood. This is every woman's bible. Yet, this is a book for all as we all are in debt to the creators of our society. I love this book. I have read it over and over and I am still thrilled and in awe after each read."