Each month, a member of the Earlham community offers the top 40 books that have most influenced him/her, personally and professionally.
Click on the tabs below to view their selections.

Each month, a member of the Earlham community offers the top 40 books that have most influenced him/her, personally and professionally. 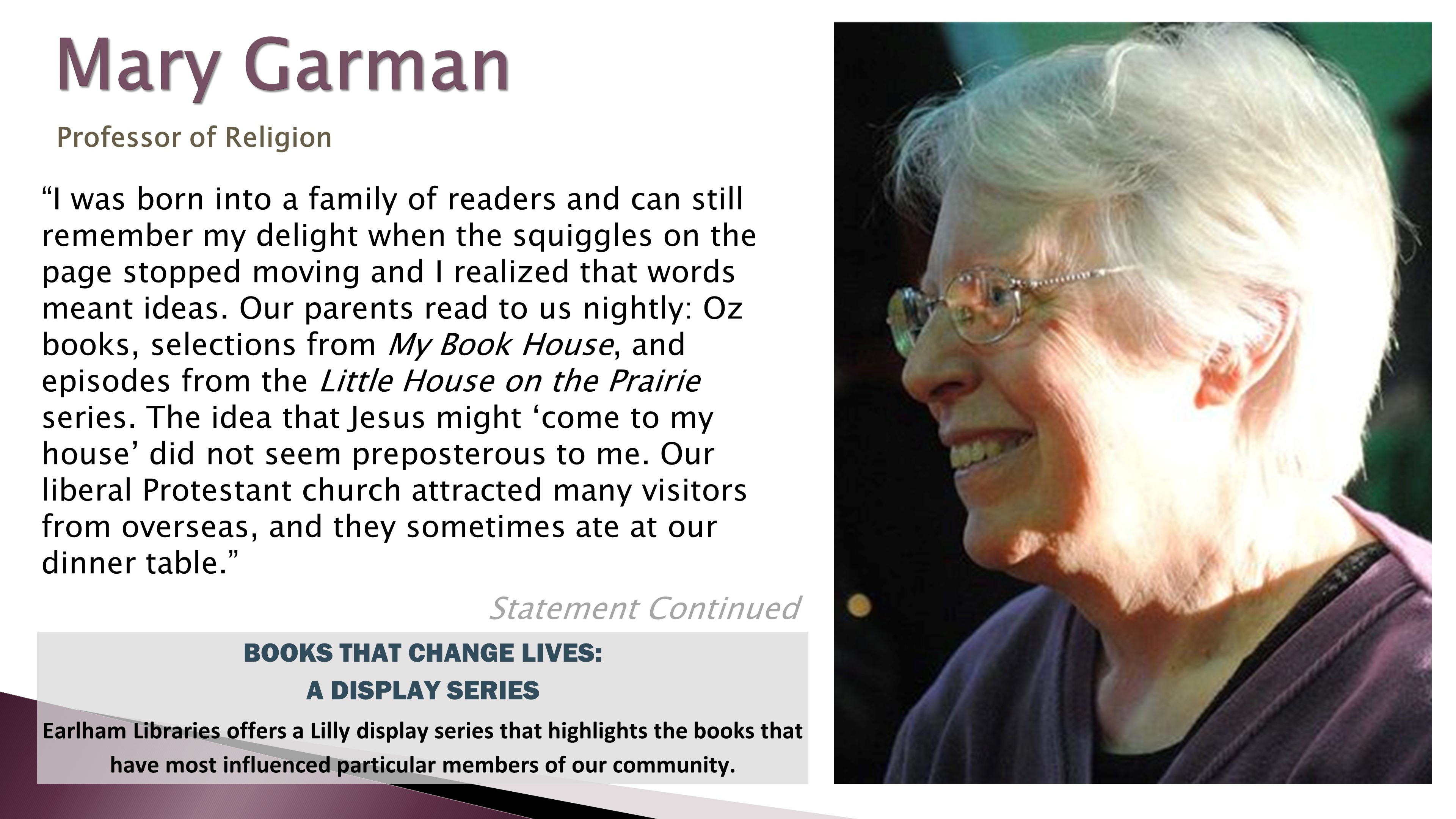 Mary Garman - I was born into a family of readers and can still remember my delight when the squiggles on the page stopped moving and I realized that words meant ideas. Our parents read to us nightly: Oz books, selections from My Book House, and episodes from the Little House on the Prairie series. The idea that Jesus might ‘come to my house’ did not seem preposterous to me. Our liberal Protestant church attracted many visitors from overseas, and they sometimes ate at our dinner table.

When I could read myself people in books became companions, and I could travel far beyond the safety of 25 East Sixth Street with Jo March [Little Women], Anne Frank [Diary] and others. I read the newspapers too, and worried about the lives of others: in Birmingham, Alabama, in Displaced Person camps, in Hungary, in the city near my home.  Kate and Jancsi [The Singing Tree, The Good Master] convinced me: I was a pacifist at seven years old.

In college I was politically engaged and also spent most of my time in the Theatre Department. Dr. King’s death and stark questions raised by the aftermath forced me to face my privilege and challenged me to speak up and to shut up. [Autobiography of Malcom X] I was part of a stunning production of Mother Courage and Her Children, [which I would later teach in my Earlham Seminar.] I participated in improvisation [Improvisation for the theatre] and street theatre, and ended up drawn to the study of Religion [a sub-field of Theatre.]

I entered the Earlham School of Religion in the early 70s as various types of Liberation Theology were emerging, and absorbed as much as my mind could manage. At the same time personal losses nearly overwhelmed me, and I found my way to inner resources: Julian of Norwich, Thomas Kelly, Dorothee Solle. After a number of years in pastoral ministry among Friends I returned to school to study with some of the leading feminist theologians and historians. [Rosemary Ruether, Rosemary Keller] The publication of Dr. King’s sermons and essays gave shape to my hope to include his voice and ideas in any future teaching.

I returned to Earlham to teach Religion in 1988. I have been influenced since then by the work of colleagues and friends – and Friends – whose work will continue to inspire me.

Teaching first year students in Earlham Seminars has kept me learning and growing, so I include books I ‘discovered’ which preparing to teach.   [Act of Faith, The Beautiful Music All Around Us.]